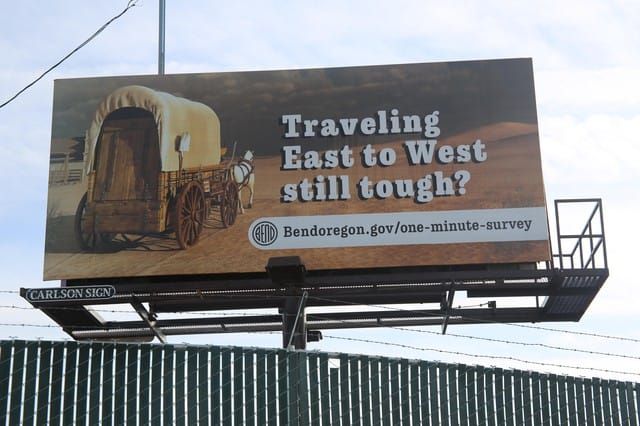 An ad campaign designed to get local folks thinking about east-west connectivity in Bend and encourage participation in a transportation survey has run afoul of cancel culture. The billboard that loomed over the intersection of 9th and Wilson depicted a covered wagon trekking across the high desert, with the tagline: “Traveling East to West still tough?” and a link to a the survey.

Because some folks complained that the billboard was culturally and historically insensitive, the City of Bend scrambled to remove and replace it.

“There were (sic) displacement of native peoples and that is real; and that is a mistake on our part to sort of acknowledge that,” King said. “So, we are taking that image down.”

That’s a lot of cultural freight for one covered wagon to haul.

The ever-tightening purity spirals that come with this kind of performative “wokeness” make it very difficult to push back. One cannot plead benign intent — intent is irrelevant. If I am offended, you have clearly given offense and the only remedy is to reverse the offending act. Questioning the validity of my interpretation or the suggestion there might be other valid interpretations is itself offensive. Your inability to grasp that a statement is insensitive is prima facie evidence of your insensitivity. Resistance is futile.

When the offended are aroused, there is no opportunity for dialogue; it’s acquiesce or face the wrath of the mob. And sometimes even the most lugubrious apology or craven climbdown won’t save you.

We have stepped through a looking glass and tumbled down a rabbit hole and landed in a wonderland where the Queen of Hearts is constantly shrieking “Off with their heads!” 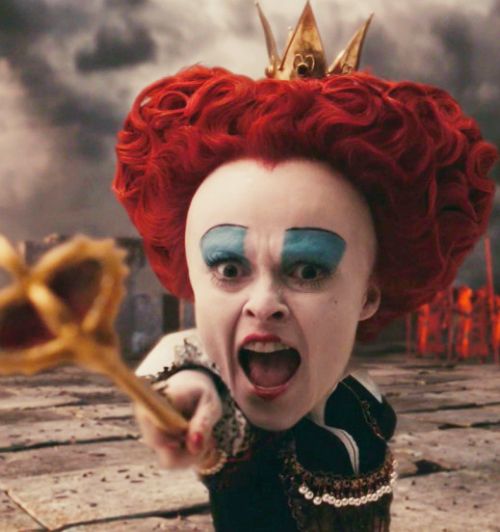 “I do get a sense sometimes now among certain young people, and this is accelerated by social media, that the way of me making change is to be as judgmental as possible about other people and that’s enough.

“Like if I tweet or hashtag about how you didn’t do something right, or used the wrong verb, then I can sit back and feel pretty good about myself because: ‘Man, did you see how woke I was? I called you out.’”

He’s right, of course, but he’s speaking in his patented calm, measured tones in the midst of a howling hurricane. At the risk of a dangerous insensitivity, one might question whether those who engage in these paroxysms of performative wokeness and feed a voracious cancel culture are really interested in change at all.

One of the citizens who took issue at the billboard told the Bend City Council:

“History matters… When we tell a history that is incomplete, we are lying to ourselves and we are asking others to believe our lies. And it’s not City Council, it’s not our City Manager, it’s not one individual, it’s all of us.”

We’ll set aside the question as to how it might be possible to tell a complete history on a billboard and acknowledge that, yes, history matters. It would be wonderful if our society actually wanted to explore our history in all its glorious complexity and contradiction. The history of America’s westward expansion — like frontier history across the globe — is a tale of epic heroism and fortitude AND a tale of duplicity, displacement and tragedy.

This silly incident in Bend moves no one any closer to engaging  with that fraught history. Quite the opposite: The fallout from this sort of episode makes people and institutions shy away from even alluding to historical themes for fear of inadvertently giving offense and finding one’s head on the Queen of Hearts’ chopping block.